Weaving the brackish humor of Chuck Palahniuk’s Fight Club with the empathy of Barbara Ehrenreich’s Nickel and Dimed, J. R. Helton brings to life an obscured, all-too-often ignored slice of the American psyche in this unflinching memoir of blue-collar Texas.

“J. R. Helton is my favorite contemporary American writer. He has a gift for writing well in plain language, and he can’t seem to help but write with total honesty. I eagerly devoured Bad Jobs and Poor Decisions, as I do all his writing. Everything he puts down on paper ought to be printed and disseminated to the reading public.”
– R. Crumb

“Somewhere between literary tinctures reminiscent of Charles Bukowski and Harvey Pekar, Helton conjures an intoxicating voice that mines mordant memories of abject and downtrodden moments to reveal hilarious, gobsmacking, and often haunting, epiphanies. When it doesn’t break your heart, this book might bust your gut from laughing.”
– John Philip Santos

“Bad Jobs and Poor Decisions is Helton at his best, as he recalls trudging through the lower depths working a myriad of menial jobs. With an abundance of humor, sharp observation, and a terrific ear for dialogue, he makes the bleak and tragic subject matter something to be savored.”
– Terry Zwigoff, director of Crumb, Ghost World, Bad Santa, and Art School Confidential

“Both funny and sad, this book illuminates the hard work and unrelenting tenacity of people who scratch a living with manual labor.”
– Jan Reid, author of Sins of the Younger Sons

“I can’t help but fall for the way the rough and the poetic combine…Helton’s language will eat you up. His characters are wonderful and they are awful. They are so human, just like the rest of us.”
– Erika T. Wurth, author of Crazy Horse’s Girlfriend and Buckskin Cocaine

“These pages contain a cutting, insightful, and addictively readable slice of sociological rabble-rousing―a literary feat that takes a rare talent to pull off. Luckily for us, J. R. Helton has that talent in spades. He fires on all cylinders, speaking truth after truth, and taking no prisoners. Bad Jobs and Poor Decisions stands proudly alongside the best of Miller, Bukowski, and Fante.”
– Tony O’Neill

“Helton (The Jugheads, 2014) titles this memoir of his life in Texas in 1989 accurately; both he and his new wife, Susan, fill their marriage with bad jobs and poor decisions. After one modest publication, Helton drops out of college and begins an extended alcohol-and-drug bender barely supported by work that exhausts him, keeps him in problematic company, and costs him half a thumb. He paints commercial property. He hauls and stacks wood. He collects railroad ties into flatbeds with his brother. The beat-down that Reaganomics visited on Texas’ poorer classes is on full display here. Susan likewise struggles with meaningless work, substance abuse, and bad boundaries. Their challenging marriage structures this memoir, but the showpiece of Helton’s story is his account of trying and failing to make a life by working hard labor for less than living wages. The dialogue Helton captures from his coworkers and bosses is authentic and wrenching. Readers will enjoy the clear eyes with which Helton looks back on himself and the late 1980s, when nothing was clear.”
— Emily Dziuban, Booklist 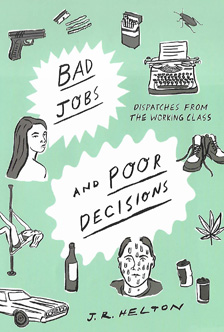