we didn't have video tapes or dvds or cable or on demand or anything like the internet when i first started doing TV in the sixties. we were lucky just to have a tv set at first and it was in black and white like most...

24 May The movie was better than the book. 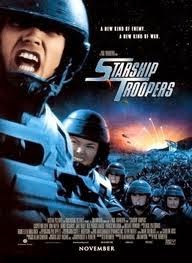 i wrote the essay below over 15 years ago, in 1998, in defense of the then recently released in theaters feature film "Starship Troopers" by Paul Verhoeven which i viewed then and now as a hilarious but frightening send up of america's increasing militarism and slide into fascism and a police state. the film was written by ed neumeier who also wrote the first Robocop film, another great satire on similar subject matter and a jab at verhoeven's american movie going audience itself. both film's still hold up and it looks like i was sadly correct in '98 in noting america's constant need for a new enemy/other to sustain our insanely high military budget, very little of which going to the soldiers themselves who have to fight the wars. We did find that eternal enemy other only three years later in the War on Terror, started roughly in 2001 after the brutal attack on the world trade center in new york by what we used to call "hijackers" that we fought then as the criminals they were rather than as "the terrorists" who morphed quickly off the dull, dumbass tongue of my fellow texan, the former president turned watercolorist, george w. bush, into "the bad guys" on every major media outlet in america, even pbs, a term that would confirm the worst of verhoeven's satire and my writing below. i posted this essay because i just saw an article from only a few months ago, November 2013 by a Calum Marsh in the magazine The Atlantic where apparently they agree with my conclusions now though pretty much no one did when i first wrote this analysis of Heinlin's book and Verhoven's film, again, back in 1998. i was living in a dilapidated trailer at the time, dead ass broke, surrounded by 324 barking stray dogs, and i never would have guessed that paul verhoeven and i would have the same book publisher one day,15 years later, with Seven Stories Press in new york...
Read More